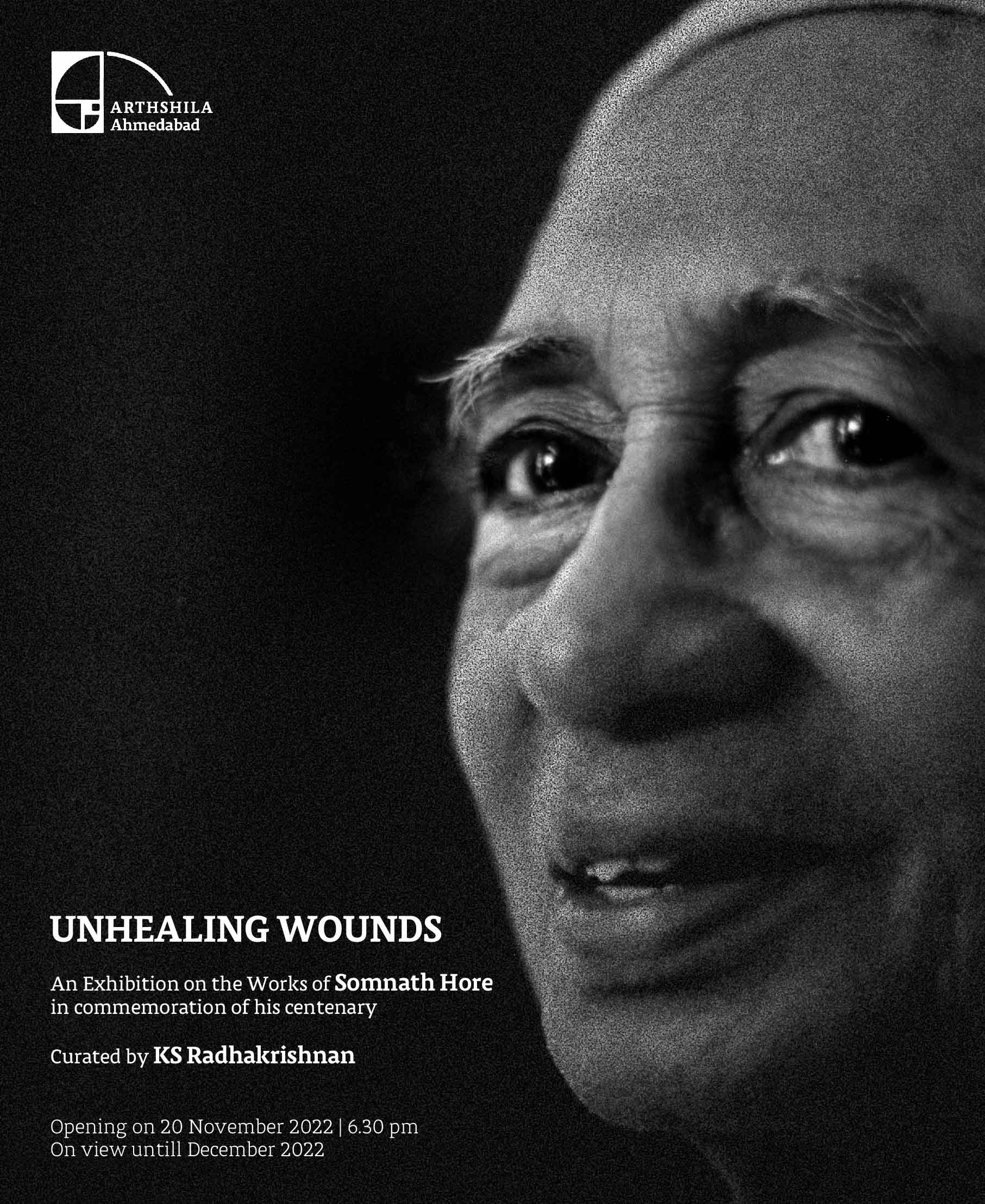 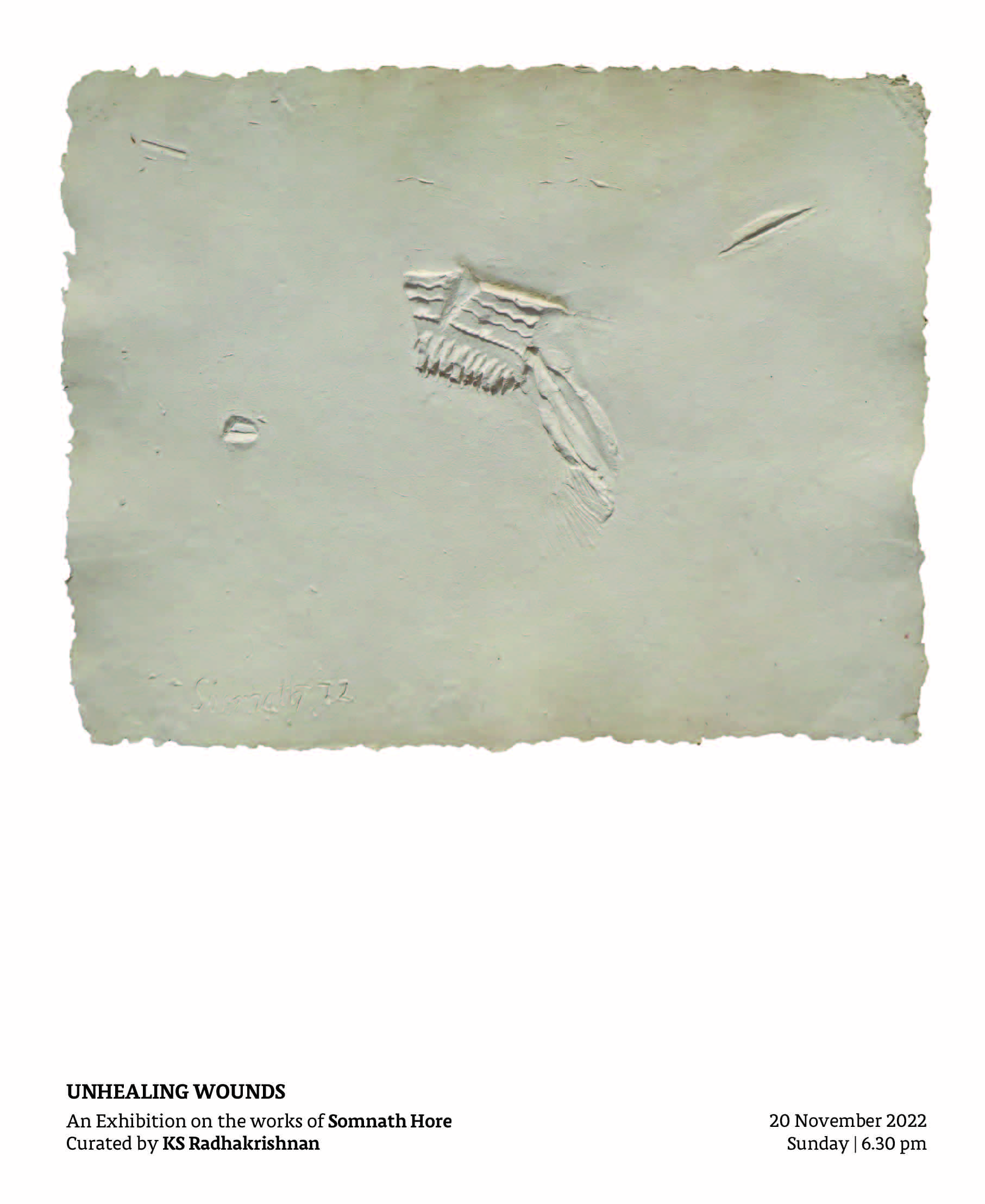 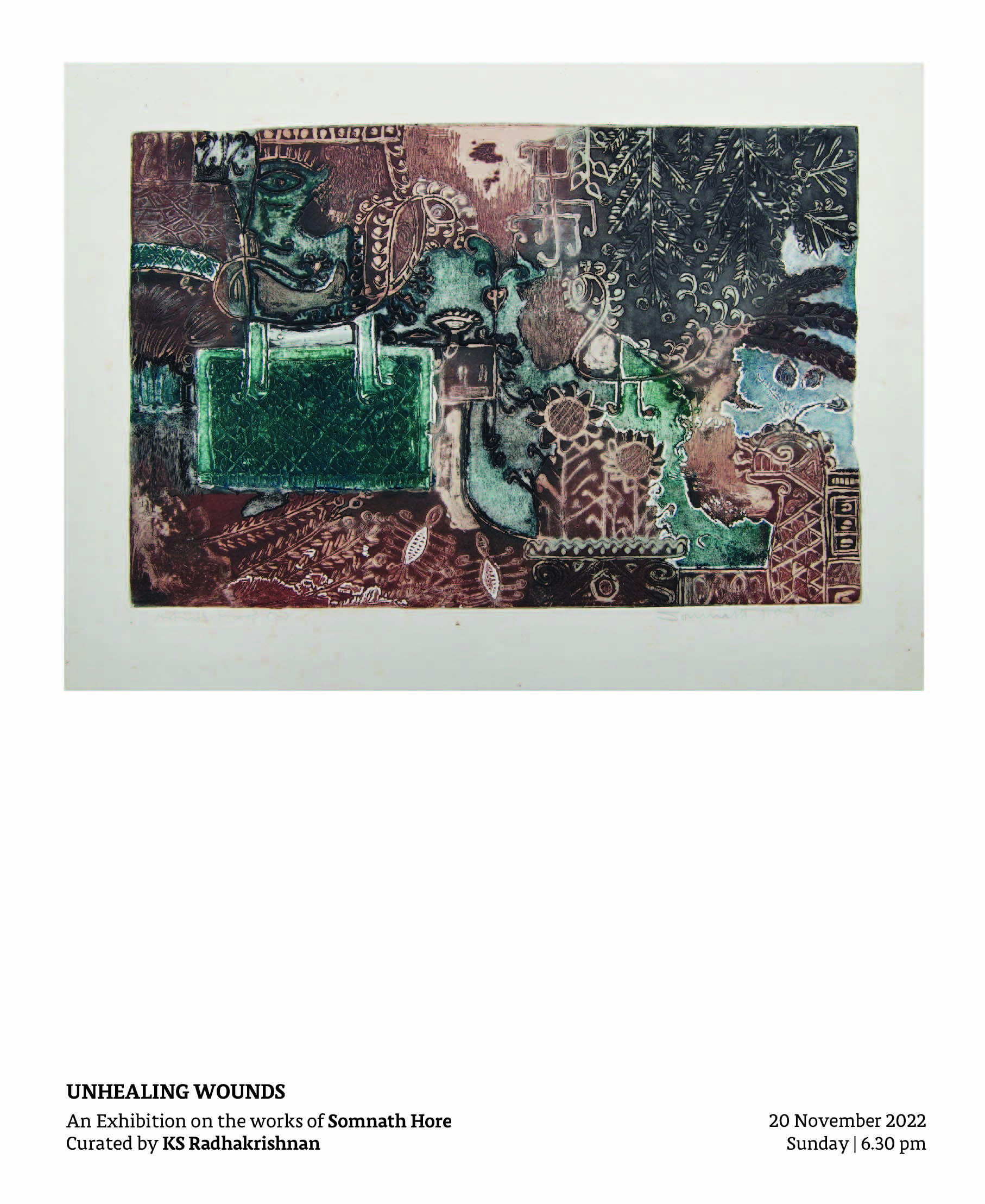 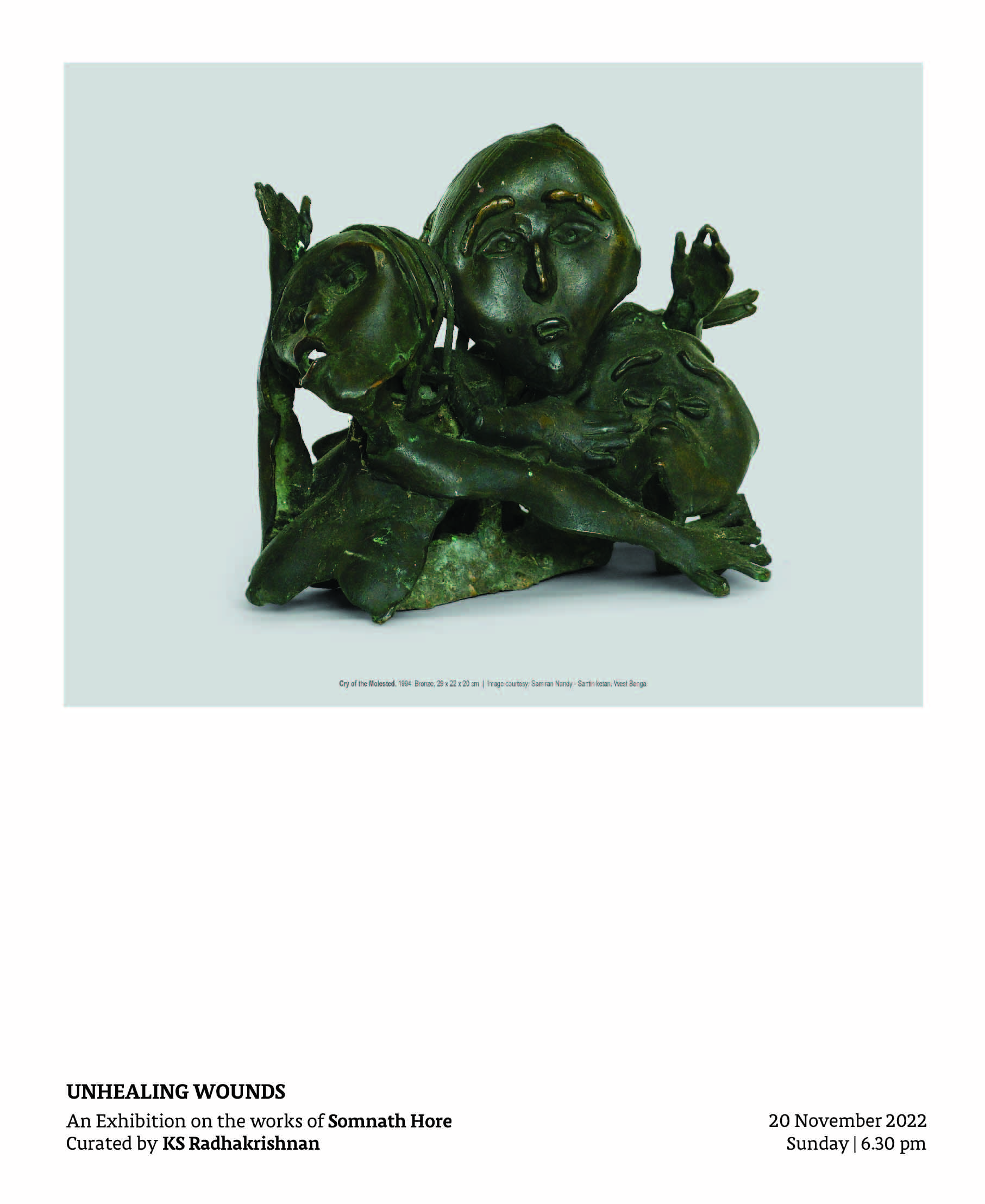 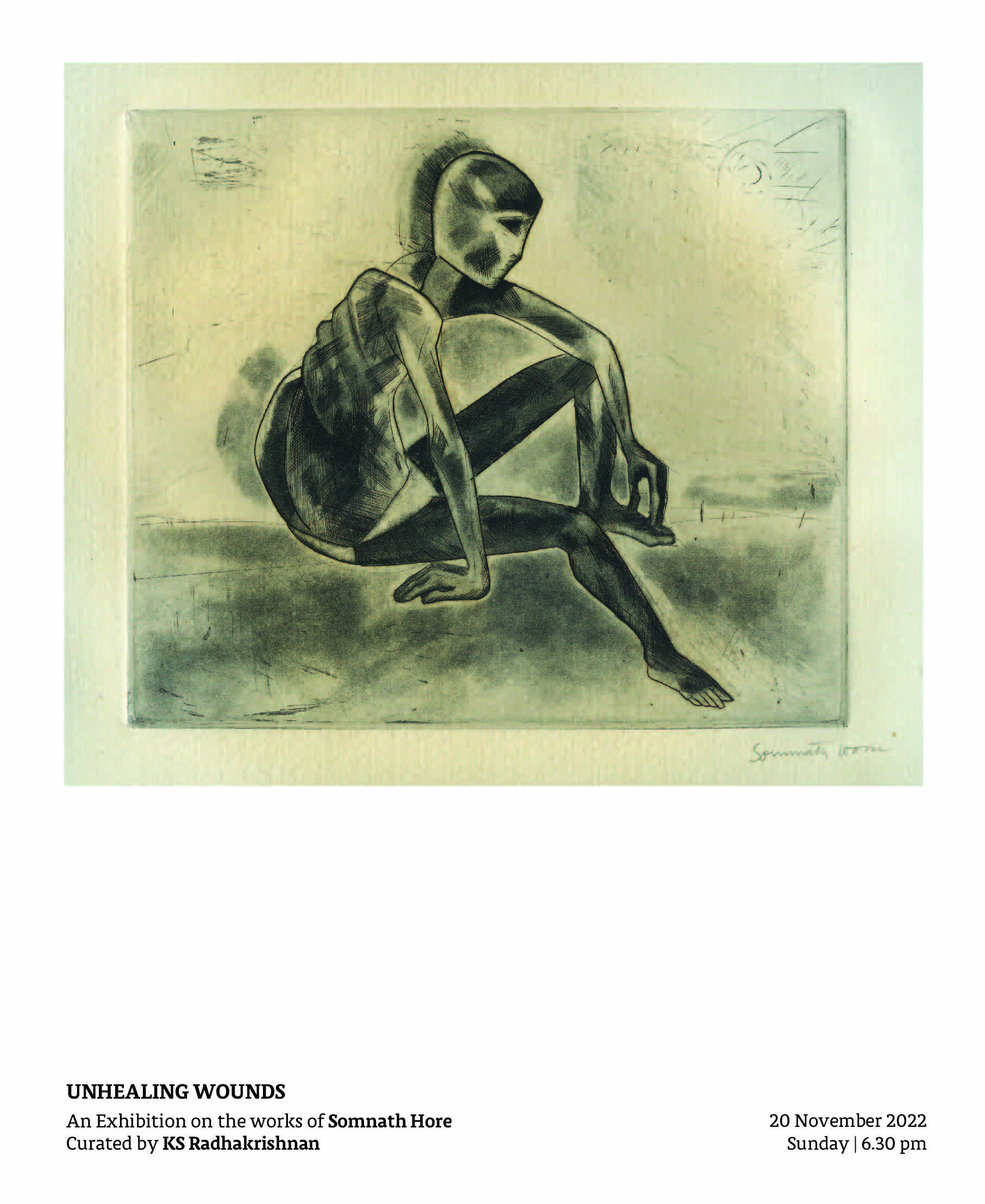 UNHEALING WOUNDS:
An exhibition on the Works of Somnath Hore in commemoration of his centenary
Curated by KS Radhakrishnan

Arthshila Ahmedabad hosted the opening of ‘UNHEALING WOUNDS: An Exhibition on the Works of Somnath Hore in commemoration of his centenary, curated by KS Radhakrishnan on 20 November 2022 at 6.30 pm. The Exhibition is on view until January 2022.

“I have never been able to make beautiful artefacts in the usual sense. When someone wants to know my bio-data, I have to point towards these artefacts. I presume the viewers will react in their own personal ways to find a bio-data.”

One of the great multi-faceted artists of the 20th century, Somnath Hore was remarkable for the consistency and intensity with which he explored human suffering via numerous techniques of printmaking and bronze sculptures.

In 1970, Somnath Hore embarked on his famous series of white-on-white prints – made using paper pulp and wax sheets that he slashed, lacerated and bruised – which he called ‘Wounds’. Over the years, his work had steadily gained the quality of abstraction, but with ‘Wounds’ it was as if he had moved on from depicting figures as objects of suffering and was now making himself and his viewers partake of the suffering itself.

KS Radhakrishnan is a sculptor and bronze has remained his prominent medium for a long time. Radhakrishnan went to Santiniketan in 1973-74 to pursue BFA in Sculpture from Kala Bhavana, Visva-Bharati University. He was awarded with a research grant by Lalit Kala Akademi, Delhi to work in Garhi Village. Since then he has had more than fifteen solo shows and numerous group shows. In 2022, he curated two major exhibitions titled Somnath Hore: A Centenary Exhibition and Iti, Satyajit Da Letters to a friend from Satyjit Ray. He also published a book on Somnath Hore on the occasion of centenary exhibition.